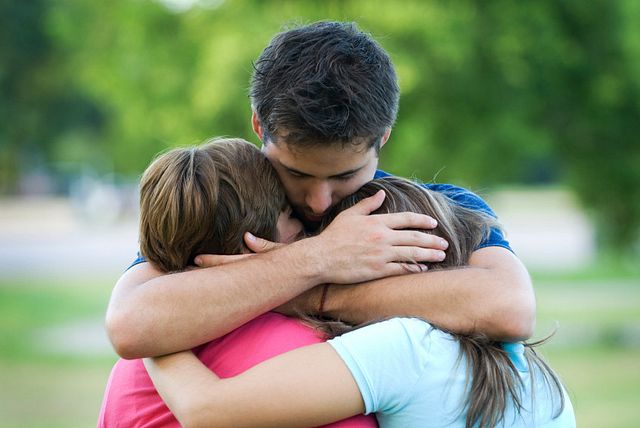 Being a parent of two children, both now grown, I can identify with these parental analogies.  They help me begin to comprehend how God feels about us.  If necessary, Shirley and I would give our lives for Danae and Ryan in a heartbeat.  We pray for them every day, and they are never very far from our thoughts.  And how vulnerable we are to their pain!  Can it be that God actually loves His human family infinitely more than we, "being evil," can express to our own flesh and blood?   That's what the Word teaches.

An incident occurred during our son's early childhood that illustrated for me this profound love of the heavenly Father.  Ryan had a terrible ear infection when he was three years old that kept him (and us) awake most of the night.  Shirley bundled up the toddler the next morning and took him to see the pediatrician.  This doctor was an older man with very little patience for squirming kids.  He wasn't overly fond of parents, either.

After examining Ryan, the doctor told Shirley that the infection had adhered itself to the eardrum and could only be treated by pulling the scab loose with a wicked little instrument.  He warned that the procedure would hurt and instructed Shirley to hold her son tightly on the table.  Not only did this news alarm her, but enough of it was understood by Ryan to send him into orbit.  (It didn't take much to do that in those days.)

Shirley did the best she could.  She put Ryan on the examining table and attempted to hold him down.  But he would have none of it.  When the doctor inserted the pick-like instrument in his ear, the child broke loose and screamed to high heaven.  The pediatrician then became angry at Shirley and told her if she couldn't follow instructions she'd have to go get her husband.  I was in the neighborhood and quickly came to the examining room.  After hearing what was needed, I swallowed hard and wrapped my 200-pound, six-foot-two-inch frame around the toddler.  It was one of the toughest moments in my career as a parent.

What made it so emotional was the long mirror Ryan was facing as he lay on the examining table.  This made it possible for him to look directly at me as he screamed for mercy.  I really believe I was in greater agony in that moment than my terrified little boy.  It was too much.  I turned him loose--and got a beefed-up version of the same bawling-out Shirley had received a few minutes earlier.  Finally, however, the grouchy pediatrician and I finished the task.

I reflected later on what I was feeling when Ryan was going through so much suffering.  What hurt me was the look on his face.  Though he was screaming and couldn't speak, he was "talking" to me with those big blue eyes.  He was saying, "Daddy!  Why are you doing this to me?  I thought you loved me.  I never thought you would do anything like this!  How could you?  Please, please!  Stop hurting me!"

It was impossible to explain to Ryan that his suffering was necessary for his own good--that I was trying help him--that it was love that required me to hold him on the table.  How could I tell him of my compassion in that moment?  I would gladly have taken his place on the table, if possible.  But in his immature mind, I was a traitor who had callously abandoned him.

Then I realized there must be times when God also feels our intense pain and suffers along with us.  Wouldn't that be characteristic of a Father whose love is infinite?  How He must hurt when we say in confusion, "How could You do this terrible thing, Lord?  Why me?  I thought I could trust You!  I thought You were my friend!"  How can He make us understand, with our human limitations, that our agony is necessary--that it does have a purpose--that there are answers to the tragedies of life?  I wonder if He anticipates the day when He can make us understand what was occurring in our time of trial.  I wonder if He broods over our sorrows.

Some readers might doubt that an omnipotent God with no weaknesses and no needs is vulnerable to this kind of vicarious suffering.  No one can be certain.  We do know that Jesus experienced the broad range of human emotions and that He told Philip, "Anyone who has seen me has seen the Father" (John 14:9).  Remember that Jesus was "deeply moved in spirit and troubled" when Mary wept over Lazarus.  He also wept as He looked over the city of Jerusalem and spoke of the sorrow that would soon come upon the Jewish people.  Likewise, we are told that the Spirit intercedes for us now with "groans that words cannot express" (Rom. 8:26).  It seems logical to assume, therefore, that God the Father is passionately concerned about His human "family" and shares our grief in those unspeakable moments "when sorrows like sea billows roll."  I believe He does.